If you’re looking to buy a new SUV, the Passport and the Pilot are the stars of the Honda range. But which of the two should you buy? Although they’re based around the same engine and mechanics, there are several important differences. Here’s what you need to know to help you decide.

The biggest difference between the two vehicles is their seating capacity. The smaller Passport has room for up to five people in comfort, while the slightly extended Pilot has a third row which pushes the capacity up to a potential eight passengers.

Both cars have a good amount of headroom and legroom for the first two rows, but it’s clear that the Pilot’s third row is a bit of a squeeze. Adults of average height should have no difficulties, but taller passengers should perhaps stick to the front seats or middle row.

Nonetheless, the Pilot‘s extra capacity makes it ideal for larger families, without crossing the line into full-size SUV territory. 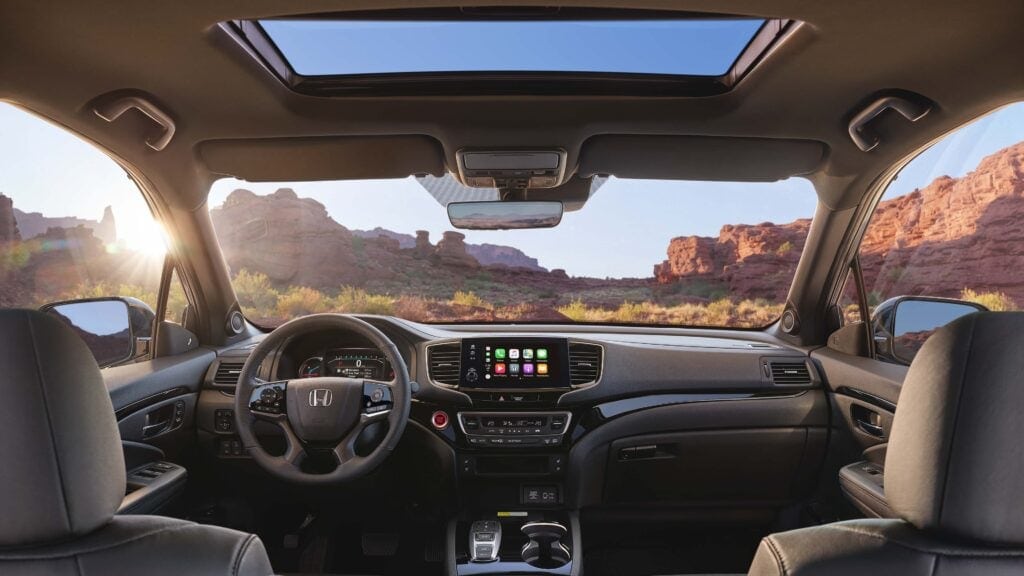 Both cars are based around the same underlying mechanics, with a 3.5L V6 engine pushing 280hp and 262lb-ft of torque through a nine-speed automatic transmission.

For both cars, this is more than enough for smooth and confident highway driving. However, as you’d expect from its slightly smaller size, the Passport is noticeably quicker to respond to the throttle, with overall acceleration performance being slightly better than the Pilot.

The difference in vehicle size also shows up in the fuel economy figures. The Passport manages 12.5L / 100km in the city and 9.8L on the highway.

As you’d expect, the larger Pilot scores slightly worse at 13L / 100km for city driving, but this is offset by the surprisingly better highway figures of 9.3L / 100km. This can be explained by the Passport’s transmission being slightly biased towards responsive acceleration rather than straight-line economy.

As the larger vehicle, the Pilot naturally has more cargo space available. However, it’s also more flexible in how the interior space is balanced between passengers and cargo.

With all seats upright, the Pilot still has 467L of space available behind the third row. However, by folding one or two rows down, this can be increased to 1,325L or a hefty 2,375L.

While it’s not quite not as generous as the Pilot, the Passport still offers highly respectable capacities of either 1,166L or 2,205L.

At the entry level, there’s not much to choose from between the two cars. The base Passport Sport comes in at $42,490 compared to the Pilot LX’s $41,290. However, moving up the trims, the differences become more apparent, with the top-end Pilot Black Edition costing $55,190 compared to the Passport Touring at $49,490.

Both these Honda SUVs are excellent vehicles, but are aimed at slightly different buyers. Those with larger families should probably choose the Pilot with its extra seating and cargo space, while if you’re looking for a slightly more exciting driving experience, then the zippier Passport makes a great cost-effective deal.